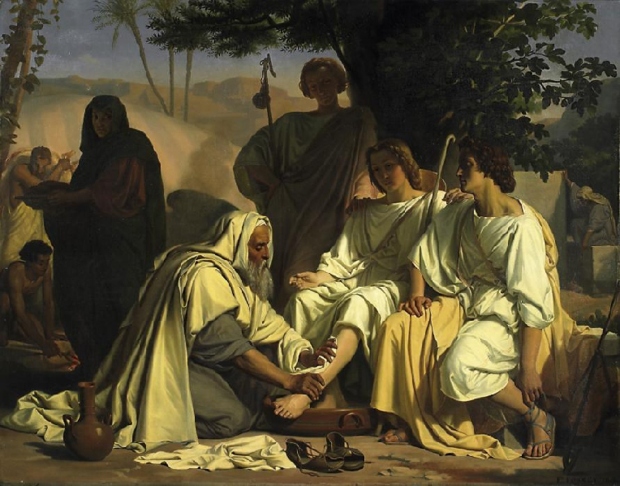 “Against all hope, Abraham in hope believed
and so became the father of many nations,
just as it had been said to him, “So shall your offspring be.”

19 Without weakening in his faith,
he faced the fact that his body was as good as dead—
since he was about a hundred years old—
and that Sarah’s womb was also dead.

20 Yet he did not waver through unbelief regarding the promise of God,
but was strengthened in his faith
and gave glory to God,
21 being fully persuaded that God had power to do what he had promised.”

Ah, what a passage! Ah, the Truth of the Word of God, ascending to—and descending from!—the very throne room of the LORD in heaven and yet being so powerfully practical as to speak to us in the trenches of earthly life…

And yet Abraham believed in God’s promise…Abraham valued more highly what his ears heard (what God said) than what his eyes saw (how his situation seemed).

And yet he also “faced the fact” that yes, God clearly promised Abraham that he would have a son and that the LORD would work through that son and his descendants to bless the entire world!

All three were facts…and so Abraham had a decision to make.

But how could his faith be strong enough to stand up under such a heavy situation?

How could his faith be strong enough to carry the load of such facts?

So how was he able to believe God and not his situation?

So what “facts” are you facing today,
and what promises has God made to you in His Word regarding those “facts”?

My sins are too great; I could never be forgiven of this!

My temptations are too powerful; I could never overcome them!

My heart is too broken; I could never be joyful again!

My fear is too overwhelming; I could never have peace!

My body & spirit are too tired; I could never keep going!

My gifts are too plain; I could never follow Jesus THERE!

Have you been “fully persuaded” of God’s power—do you look around and look back?

Look around: God made the universe with His Word! He simply spoke the universe into existence, and with no raw materials to work with. He made everything out of NOTHING! What a God! And doing so didn’t tire God; He wasn’t exhausted at the end of this masterpiece, worn out and fully spent of His creative power. He didn’t break a sweat in creating the universe! He rested on the seventh day not because He needed to but to set an example for us who WOULD need to learn how to rest our minds, hearts and bodies!

Look back: this is one of two times that God allows us to look back on our past; the first is when we repent of our sins and the second is when we remember His faithfulness. God has carried you this far—will He now abandon you? Now by this I don’t mean to imply that He will give you the outcome you are asking for in the present trial you are facing; I simply mean that He will continue to fulfill His promises to you, promises to never abandon you, promises to complete the good work IN you (character formation and faith-conditioning).

But you might say, “I’ve TRIED all of this! I’ve prayed, been patient, praised God when I didn’t feel like it, come to church when I didn’t want to, given time & money when I didn’t have any, read the Bible when it didn’t make sense, and waited waited waited for God to do something, anything, to bring me out of my situation! It hasn’t worked! I’ve tried all this before, and I have nothing to show for it…”

I hear you…some of you are going through pain and trials right now that only you and the LORD know about, and that only King Jesus can possibly understand.

But let’s learn a lesson from medical doctors.

Let’s say there is a young child who wants to be a doctor when he/she grows up, simply knows from a very young age that this is what God wants them to do.

My friends, this is what we have to remember when we have been praying to Jesus, waiting on Jesus, following Jesus, and worshiping Jesus for many years, when we want to see Jesus bring us out of a trying situation—the work that King Jesus is doing in us is Crock-Pot work, not microwave work. His goals for us being closer to Him relationally, more like Him in our character, and more certain in our faith—these goals take a lifetime. The pain and pressure we face often makes even the best of us say,

It’s understandable that we would feel that way and say those things, but oftentimes it is like thinking that you should have a medical degree after 15 years of hard work academically. Some of the painful situations in life require 25 years (or more!) of praying, waiting, working, forgiving, serving, pursuing, sharing, apologizing, etc.

And by nature when interacting with other sinful humans,
some of our painful situations will not get worked out as we hope they will!

Abraham faced the big fact of his terrible situation by facing the BIGGER fact of His terrific Savior: knowing the character of God, knowing the promises of God, remembering what God had already done and what He promises to do…and putting one foot in front of the other…

Will you do the same?