Can We Trust The Bible?… 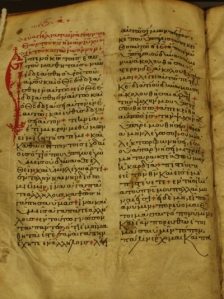 What are some reasons for trusting that the Bible is true, that it is in fact the Word of God?

What are some reasons for not trusting that the Bible is true, is the Word of God?

1. People just made it up—it’s just the opinion of some people from a long time ago. A lot of books claim to be the words of God. Either the Gospel writers lied or were confused/mistaken/wrong.

Fair enough–let’s talk about that.

If Not Liars or Confused, Then The Writers of the Four Gospels Had to Be Telling the Truth!

2. Some say another reason for not trusting the Bible is that there are errors in it since it has been copied so many times over the last 3,500 years—twenty people can’t even play the “telephone game” accurately!

3. Ok, fine—but how do we know the Bible is the Word of God and not just the clever ideas of people?

Isaiah 53 was written 600 years before Jesus was born yet was so accurate in its detail that critics for many years simply believed that it was written after Jesus’ life (the Dead Sea Scrolls contains a copy of Isaiah 53 dated somewhere between 100-200 BC!);

The book of Daniel (written around 600 BC) claimed the exact year that the Messiah would begin His public ministry (26 AD). Jesus began His public ministry between 26 AD-30 AD. Daniel also claimed that Jerusalem and the Temple would be destroyed 30-40 years after the Messiah’s death. Jerusalem and the Temple  were destroyed 43 years after Jesus’ death.

The Bible has made around 2,500 predictions, and around 2,000 have already come true. Crazy. This alone is powerful proof. Keep in mind that in the Old Testament this was the critical proof to whether or not a prophet was from God: if what they said came true, they were from God (i.e. speaking for Him). The Bible passes this test.

“Anyone who kills you will think they are doing God’s will” (John 16:2). This already is happening, unfortunately, in many parts of the world.

“A wife of noble character who can find? She is worth far more than rubies. Her husband has full confidence in her and lacks nothing of value” (Proverbs 31:10-11). I can personally vouch that this is true.

“A fool finds no pleasure in understanding, but delights in airing his own opinions” (Proverbs 18:2). Do you know anyone who only wants to blab about their opinions without ever listening to yours?

“The first to present his case seems right, till another comes forward and questions him” (Proverbs 18:17). This rings true in every courtroom scene in movies and television!

Read the apostle Paul’s words here—can anyone relate to this!?!?

“My father and mother walked out and left me, but God took me in” (Psalm 27:10 The Message). God proved this in my wife’s life by blessing her with my side of the family and many others who have loved and accepted her since day one, as well as reconnecting her to all of her siblings.

“Jesus said, ‘Mark my words, no one who sacrifices house, brothers, sisters, mother, father, children, land—whatever—because of me and the Message will lose out. They’ll get it all back, but multiplied many times in homes, brothers, sisters, mothers, children, and land—but also in troubles. And then the bonus of eternal life! This is once again the Great Reversal: Many who are first will end up last, and the last first’” (Mark 10:29-30). Again, Jesus has blessed my wife the last 14+ years despite her parents disowning her for receiving Jesus as her Savior. He has blessed her socks off in every way—we’ve even had people come up to us and remark how they have seen God blessing us in little and big ways.

Bottom Line: We each need to decide for ourselves if we are going to trust the Bible or not.

But please consider this: Many people aren’t willing to believe—that is why many attack the Bible. It is easier not to believe—in the short run—than it is to believe, obey, change, admit we’re wrong, apologize, ask God and others for forgiveness, etc. (Like your parents leaving you home alone for the weekend and giving you a set of rules and instructions—it is in your best interest to figure out how to disbelieve the authenticity of the note so that you can do anything you want!).

There are plenty of reasons to be sure the Bible is accurate and authentic, inspired by God to help humans know Him, know ourselves, know how to live on earth and how to be in heaven forever. Please use this opportunity today to seek out God and see if Jesus and the Bible can be trusted with your entire lives!

← God’s Resume…
Sonnet: “Who Is The One Towards Whom Desire Flows?” →

3 thoughts on “Can We Trust The Bible?…”