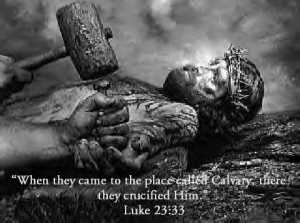 Question: What do you know about the story of Christmas?

Sometimes when you have looked at something for a long time, it is helpful and important to change your perspective, the angle at which you are looking at that something.

“Think of yourselves the way Christ Jesus thought of himself. He had equal status with God but didn’t think so much of himself that he had to cling to the advantages of that status no matter what. Not at all. When the time came, he set aside the privileges of deity and took on the status of a slave, became human! Having become human, he stayed human. It was an incredibly humbling process. He didn’t claim special privileges. Instead, he lived a selfless, obedient life and then died a selfless, obedient death—and the worst kind of death at that—a crucifixion.

Because of that obedience, God lifted him high and honored him far beyond anyone or anything, ever, so that all created beings in heaven and on earth—even those long ago dead and buried—will bow in worship before this Jesus Christ, and call out in praise that he is the Master of all,to the glorious honor of God the Father.”

Question: What is Christmas the story of? What is the main event of Christmas?

Response: God became a human, born of a woman—the Incarnation.

This is a big deal, my friends.

Question: Why is this important for us, for all humans?

Response: Since God became a human,

1. He can relate to us and help us—He knows what we go through;

2. By living a perfect life, He could die for us, taking the punishment that we deserve for our sins against God (He could only do this by becoming one of us).

Question: Why was this important for Jesus—why was it a big deal for Him to become a human?

1. He had to leave heaven—the best place in the world.

A. It’s like going from 8th grade back to pre-school—in 8th grade you get to hang out at the mall and do fun stuff like play video games—in pre-school you have to play in cribs with blocks and you pee/poop/drool on yourself;

B. it’s like going from Six Flags Great America to a sandbox in your backyard;

C. it’s like going from Noah’s Ark Water Park to the little tub in your bathroom.

2. He had to be born as a baby, choosing to set aside some of His powers and learn as humans learn.

A. It was like going from being a capable adult to being a clumsy toddler with poopy diapers.

3. He had to leave His Father.

A. On earth, Jesus had to have the same faith in God that we do—He couldn’t see His Father the way He could in heaven. Think of how hard it must have been for the Father and the Holy Spirit to say goodbye to Jesus, knowing how much He was going to suffer and how He was going to be mistreated and die.

4. He wasn’t treated with the respect, love, adoration, and worship that He deserves.

A. He had to serve sinful people who didn’t like Him, were unfairly mean to Him, and didn’t believe in Him.

a woman clothed with the sun,

with the moon under her feet and a crown of twelve stars on her head.

She was pregnant and cried out in pain as she was about to give birth.

an enormous red dragon with seven heads and ten horns and seven crowns on his heads.

His tail swept a third of the stars out of the sky and flung them to the earth.

The dragon stood in front of the woman who was about to give birth,

so that he might devour her child the moment it was born.

She gave birth to a son, a male child, who will rule all the nations with an iron scepter.

And her child was snatched up to God and to his throne.

The woman fled into the desert to a place prepared for her by God,

And there was war in heaven.

Michael and his angels fought against the dragon,

and the dragon and his angels fought back.

But he was not strong enough,

and they lost their place in heaven.

The great dragon was hurled down—

that ancient serpent called the devil, or Satan, who leads the whole world astray.

He was hurled to the earth, and his angels with him.”

Question: Wow. So why was Jesus born as a human on earth—what was the purpose of Christmas?

B. to live a perfect life and die for those humans who will believe in and love Jesus,

C. to take the punishment that humans deserve [if we let Him] so that we can be forgiven and be in heaven forever.)

it was like He was invading enemy territory to try and rescue us from being held hostage.

This is why we celebrate Christmas—Jesus did not have to go through all this trouble,

Movie Clip: Finding Nemo (near the end of the movie where the pelican tells Nemo that his Dad has been looking for him all over the Pacific Ocean!). Please click HERE.

When we look at Christmas from a new perspective, it helps us to realize

A. how much God loves us,

B. how important His forgiveness is to us, and

C. what a big decision each of us has—whether to acknowledge and voluntarily surrender to the truth that Jesus is God and that we need His forgiveness, or not to.

Which will you choose?

1. Why was it hard for Jesus to become a human?

2. Why was it hard for Jesus to leave heaven?

3. Why did He make the choice to do this?

4. Does Jesus ask us to do anything hard and uncomfortable?

A. Admitting we are sinners and ask His forgiveness,

D. Forgiving and loving those who are mean to us, share,

E. Living as Jesus wants us to live [obedience] as a way of saying ‘thank You’ for His forgiveness, etc.

5. Will you make the choice to do these things? How?

Possible Response: By asking God to help me love Him as much as He loves me.

← Practical Ways To Get To Know Jesus In Your Daily Life…
Knowing Yourself (Part I of IV): Identity… →